From the start, Baptiste’s vision for this was to give the vines as much freedom to grow on their own as possible and produce whatever fruit they could. Beyond pruning, he touches the vines as little as possible, allows the grass to grow high, and reduces all treatments (including organic ones) to the absolute minimum, with the goal of none at all. 2019 was the first vintage produced, and the entire year saw only one treatment with copper sulfate. In 2020, the vines saw no treatments at all.

The idea of this parcel is to serve as a model for the vine to grow as free as possible, thus the name ‘Sauvage.’ This can only be done with goblet-trained vines because they are strong enough to support the long shoots, as often seen with Grenache vines in the Southern Rhône. 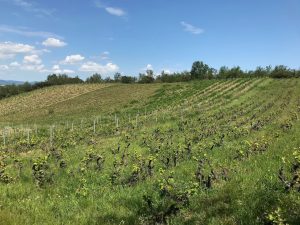 In the cellar, all of the reds are vinified whole cluster, but beyond that, Baptiste relies on his observation and intuition to produce the best wine from that particular vintage. The small cuvées like ‘Sauvage’ are crushed in a small, hand-operated vertical basket press that adds finesse and complexity to the wine. ‘Sauvage’ is usually produced using carbonic fermentation, then ages in untoasted barrels produced by a sommelier-turned-tonnelier in the Southwest of France.

The wine itself is truly magisterial and transportive, full of savory complex flavors that are both obviously Gamay but surprising at the same time. It’s a delicious bottle now, though it will be very interesting to see what happens after 5 or 10 years.