Mouscaillo is a domaine built out of strong character by the aptly named Pierre and Marie-Claire Fort on an exceptional terroir - the high altitude, steep slopes of Roquetaillade. With nearly 15 years of experience, the Forts have been crafting astonishing, pure, and ageworthy Chardonnay, Pinot Noir, and Crémant from their unique vineyards at the crossroads of Mediterranean and oceanic climates.

Pierre Fort comes from a family of vignerons dating back countless generations, who, like many regional vignerons, sold his crop off to the local cave cooperative. Being of strong and independent character, ever since he could remember, Pierre wanted to vinify his own wines, but lacked the knowledge and experience. In 1987, the couple left Limoux to gain experience working at other domaines, eventually landing in Pouilly-Fumé, where they befriended Didier Dagueneau. After a trip to visit Roquetaillade, Didier convinced them to make their own wines. In 2003, they drove 500 kilos of Chardonnay in their air-conditioned van up from Limoux and produced a micro-cuvée chez Dagueneau, of which Didier was happy to share a taste with many of his customers.

After this auspicious start, the Fort family began their own domaine in 2004, and now has six hectares of vines spread between two parcels: the north-facing Le Mouscaillo, which means ‘little fly’ in Occitan, and the south-facing Saint Pierre, both of which boast astonishing views of the snow-capped Pyrénées. Over a decade later, the duo has honed their craft, and today, is quietly making some of the most ageworthy, ambitious, and delicious whites of the region. The next generation has now taken over the domaine : their son Thomas and his wife Camille joined the effort in 2017 after studying ecology and winemaking, both of who are passionate about the region and the domaine.

Sidenote: Pierre and Marie-Claire have now retired closer to the sea close to Collioure. Their retirement project? A new vineyard and winery, of course. But this time, just for fun. 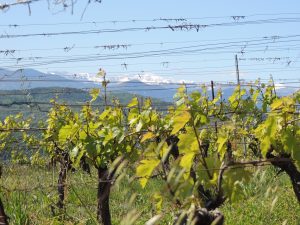 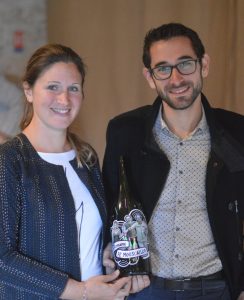 The Mouscaillo Limoux blanc comes from high altitude vines above Roquetaillade in the Languedoc. The wine is phenomenally delicious expression of Chardonnay from an unexpected area. The vision for this wine came from Pierre Fort, who left the regio...