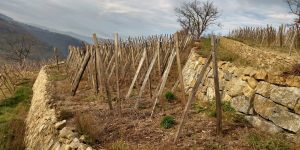 Aurélien has a knack for great winemaking, but he is also a master at naming. His vineyards each have their own personality, and rather than use the official name registered in the cadastre, Aurélien has given each parcel its own nickname. Pied Cassé (Broken Foot) is where he fell off a wall and broke his foot. Les Patates (The Potatoes) is where his uncle used to grow potatoes before Aurélien replanted to Viognier to grow Condrieu. Crêt Louison is the name of his single-vineyard IGP Syrah (Crêt means hilltop, and Louison is a bit of creative flattery named after the landowner’s daughter Louise). And let’s not forget La Teuf (The Party), which needs no explanation.

Rather than looking to increase the size of his domaine, over the past few years Aurélien has been content to focus on improving his existing vineyards, primarily by building dry-stacked stone walls with his vineyard workers. Each winter, they spend much of their time cutting and laying stones to create the walls that support the Condrieu and Saint Joseph vineyards planted on impossibly steep hillsides. 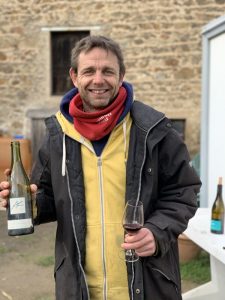 Over the past 15 vintages, Chatagnier has evolved from a scrappy kid to an established and respected winemaker in the Northern Rhône. He generally keeps away from new oak and extraction, and vinifies with a light touch, which ultimately leads to  enchanting and engaging wines that have earned their place alongside the world’s best domaines in cellars and on wine lists around the world.

As organic farming has increasingly become an obvious choice for young winemakers looking to produce excellent wines, many of these producers are looking for ways to grow better grapes and better manage the e...

As if 2020 weren't tough enough, France experienced record high temperatures a few weeks back, only to be followed three days of bone-chilling frosts. These initial summer-like days caused bud break to happen...

“Facteur” is the French word for postman, so “La Vigne du Facteur” means “The Postman’s Vineyard.” The traditional French postman in the countryside delivers mail on his or her signature yellow bike, which is...

Introducing a new Burgundy producer is always exciting, and even more so when they are based in Gevrey-Chambertin. We are thrilled to announce that Paris Wine Company is now working with Jean-Luc & Eric Burgu...

We asked Mayu Miller, our partner at Viña Franca, to write about Albert Canela and Mariona Vendrell of Succés Vinícola, as well as what it feels like to visit them at their winery in Conca de Barberà.