“This year, we saw a rather early budding that started quickly, then came to a staggering 2-week halt due to cool temperatures. The rest of the season showed a steady and uninterrupted growth until ripening. The spring was marked by regular rain (5-6 mm per week), which resulted in an increase of treatments. We were careful not to surpass the doses of authorized treatments, so to do that, we reduced the quantity of active ingredients used during each one.

The summer was not extremely hot (for example, we reached  47 °C  twice during the summer of 2019). Some vines suffered from drought and dryness. However, most reached normal maturity, except for certain whites (Chardonnay), which were very ripe very early (August 15th, to be exact). The other grape varieties thrived in mid-August, and almost everything was ready to be harvested around the 20th. This forced us to choose which plots should be brought in more quickly to ensure a smooth harvest. The stabilization of maturity the following week allowed us to breathe and to continue to bring in the grapes more serenely, favoring early harvest in the morning to preserve the freshness of the fruit. The weather was very good during this period: no thunderstorms, which are usually expected around August 15th, thus ensuring an irreproachable state of health of the grapes.

The late-ripening grape varieties (Cabernet Sauvignon, Grenache) harvested in mid-September suffered three rainy episodes, which made the harvest a bit more difficult. Cooler temperatures during this period kept the last buckets of fruit fresher for a longer period of time, which aided in the development of aromatic qualities of certain reds and rosés. Fermentations went well, thanks to the installation of a new system which allows us to monitor and regulate temperatures. To date, post-fermentation racking has been carried out on the reds. We foresee a promising, balanced, and generous vintage. 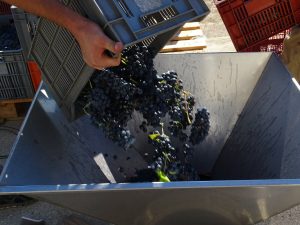 “We had a historically early harvest this year! Winter was very mild, with temperatures much higher than normal seasonal averages. This led to an early bud break. Mid-May brought some morning frosts, though fortunately without any serious consequences. By May 14th, temperatures had skyrocketed, and the very first flowers quickly appeared. The heat continued, which fostered a fast blooming evolution and thus led to a higher concentration in the fruit. We benefited from a few light rains in mid-August, which helped us reach ripeness quickly, which was marked by a rich sweetness of fruit and some promising acidities. The harvests started on the 27th of August and ended on the 10th of September, with great quantity and stunning quality of fruit. The wines are balanced and pure. Some bright promises for the 2020 vintage!”

“After a hot and dry summer, we expected an early harvest, but Mother Nature has its secrets. Our team was ready on the 25th of August, but we actually didn’t harvest the Gamay and the Veltiner until August 31st. We waited two weeks before harvesting most of our plots to achieve optimal maturity (fortunately, because we were in the process of changing the vat room and the supplier was late). Phew! The stainless steel vats arrived the day before most of the fruit came in! Our team had plenty to do in the meantime, as we were sharing our space with another winemaker located across from us in the Valley who already had his Chignin Bergeron and could not wait any longer.

We had a window of good weather until the last day of harvest, which took place on Thursday, September 24th, right before the weather suddenly declined. Autumn was suddenly upon us! The grapes are magnificent and produced very good yields. We even decided to make sparkling grape juice to diversify our lineup. In short, we found a lot of satisfaction with this vintage. Fortunately there was no late frost, as the vines were a bit ahead of schedule due to an almost-too-mild winter, which we’ve observed for the last few years now. There was a bit of hail in the spring and one plot was affected, which Sylvain treated with herbal teas from Valerian. This lowered the yield a bit.

We celebrated the end of the harvest in good form, though under windy, stormy conditions laden with torrential rains – but that did not prevent us from dancing the night away! It was very important for us to honor our magical team who gave us all of their positive energy and incredible dynamism to have a successful harvest!

Regarding biodynamic harvests, all of our fermentations started very well, as we watched them carefully and with love. We also have a little surprise – for the first time, we are going to produce a natural sparkling (Champagne method) wine from Jacquère (Les 13 Bulles, available at the end of November!) We are starting to sow green manure to naturally enrich the soils and biodynamic treatment before winter. Soon we will be meeting with other winegrowers to make the famous “Bouse de Corne” (P500) together, which will rest underground all winter underground.” 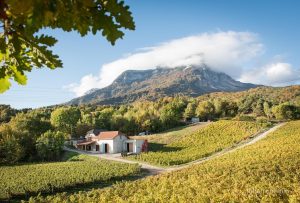 “A quick update on the 2020 harvest! We started on August 13th (three and a half weeks earlier than usual) with the Mauzac used for our ancestral method sparkling, and we finished on September 20th with Braucol. This is the earliest and shortest harvest we’ve seen (normally it takes about 6 weeks) in 20 years!

The hail episode in June and the heatwave in August caused us to lose about 15% of volume compared to other years, which is actually better than what I expected at the start of harvest. Perfect sanitary conditions in the cellar allowed for short vinifications without any mishaps. In short, the 2020 vintage should be qualitatively there, particularly for Duras and Braucol!” 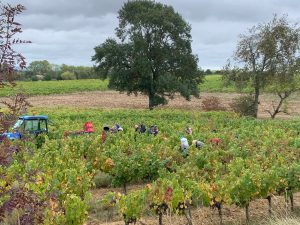