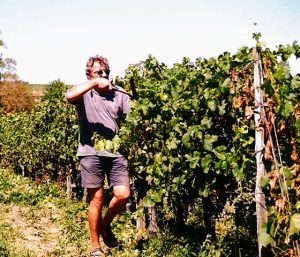 Arnauld Cassini in the vines

“Harvests went wonderfully. We are only lacking a bit in quantity… but a farmer always complains. (Insert smiley face.) Vinifications are going ahead nicely, though it is important not to extract too much. In my opinion, alcohol levels seem great : 13.5% approximately.

For this vintage, the most complicated factor was restraining mildew and oidium in spring. Fortunately, I treat the vines with a machine equipped on my back, as some days we were unable to use tractors in the vine rows. We had blocked vegetation for almost 10 days during August. A life-saving rain at the beginning of Septembre helpt us a lot!” 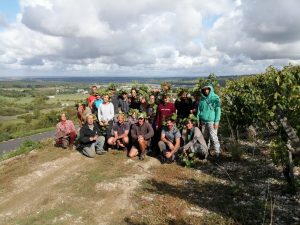 Valentin Morel and his team of harvesters

“2020 was marked by a summer heatwave and strong oidium pressure. This was the most staggered harvest in our history! We started picking around the 26th of August with some very ripe Poulsard grapes, which cannot withstand heat. However, we had to take long breaks after the Poulsard and Crémant crops (before Chardonnay and Savagnin), as it was completely impossible to continue due to summer dryness.

The last Savagnin was harvested on the 17th of September. Despite dryness and a heatwave, our old vines resisted well and produced some nice bunches, ripe berries, and decent yields in juice. Only our Pinot Noir berries were clearly wilted due to the lack of water, which resulted in a very low yield in juice.

The young vines have suffered a lot from dryness, with falling vine leaves right before the harvest. This gave me no choice but to pick up Trousseau and Chardonnay from the ‘Bois d’Arnaux’ vineyard and vinify them in Crémant.

Overall, acidity held up nicely, except for Trousseau and Poulsard. Nitrogen levels are very high for all varieties, and we’ve had some difficult fermentations (sudden temperature changes during vinifications around the 21st of September). Airing and racking have no effects. Alcohol levels are high, though phenolic ripeness was difficult to reach.”

“Regarding the 2020 harvest, we are truly satisfied with what nature has given us. This vintage will again go down in the books due to its stunning earliness. We kicked off the harvest on the 31st of August, which has never occurred in our three generations.

We obtained an unexpected quantity for our white and red Sancerre due to dryness throughout May to July. We also benefited from scattered rain showers in August, which let us reach our yields at the last minute. We harvested with a great balanced ripeness (sugars and acidity), which will bring some “fruit” to our wines, as well as a clear freshness. We managed to conduct our harvests over two weeks, although the second one was slightly more complicated due to heat waves. A new vintage waits to be discovered as of January 2021.” 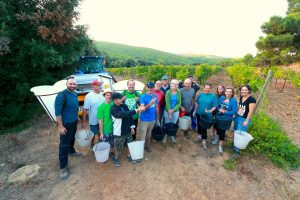 The Beauregard-Mirouze team in the hills of Corbières

“In Corbières, the 2020 vintage was marked by an exceptionally rainy and mild spring. There was a great battle with mildew, which is quite unusual here. However, overall, we managed it well. The summer was hot but not excessively so, and late summer rains brought the right amount of water to allow the vines to ripen gently.

Harvest kicked off on the 25th of August, which was one of the earliest start dates for us in over 20 years. The warm weather and humid sea air allowed grapes to continue ripening, and harvest days succeeded one after another without any breaks between white red varieties. We finished harvest on 17 September – again, a record here (usually we finish around the beginning of October). We invested in a sorting table and it was the right year to do so due to the mildew stigmas and the late worms attacks. This enabled us to sort more precisely than when we used to do it right in the vineyard.

The harvest is relatively small, but the juice quality is truly stunning. It has been two years since we made the leap to biodynamic farming and we have observed that the aromas come really early, and that maturity is reached before the temperatures start to rise too quickly. Fermentations went perfectly, which leads us to believe that the wines will be balanced and accurately aromatic.”