The past few years have not been kind to the fine folks in Fleurie. In 2016, two hail storms cut a clear path through Grand Pré in Fleurie where the Bertrands have their vineyards, destroying over 90% of the harvest. The Northern side of Fleurie was spared any damage, and Yann was able to make the Fleurie Cuvée Phénix from purchased grapes on the slopes behind La Madonne, as well as the cuvée Pur Jus from beautiful old-vine terraced vineyards in Juliénas. The entire production of the domaine was blended into a single wine called Chaos Suprême, released only in magnum.

In 2017, at least one could say that the visiting hail storms were less discriminating, and equally affected vineyards throughout the entire village of Fleurie. As a result, winegrowers kept any remaining grapes for themselves, and Yann had to look elsewhere. Following the same chart de qualité he set out in 2016, Yann accepted only to purchase grapes sur pied farmed sustainably or organically which he would harvest and vinify himself. The cuvée Juliénas Pur Jus makes a return for its second vintage, and Yann has added a new wine – Saint-Amour Les Bambins.

The Famille Bertrand Saint-Amour Les Bambins comes from a 2 acre parcel in the awesomely named vineyard La Creuse Périlleuse – the dangerous ditch. Yann and his team picked the grapes and vinified them at the domaine using exactly the same Gamay magic as his other wines. The result is just as delicious as well. 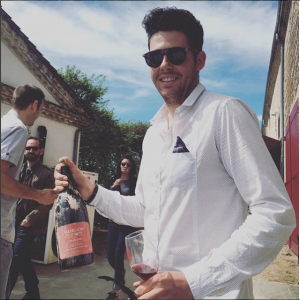