Originally from the Jura, Nicolas Jacob started out working on local organic vegetable farms. He picked up the wine bug, and apprenticed under Jean Macle and Jean-François Ganevat before taking off on his own winemaking adventure with 1 hectare in L’Étoile. With two years of élévage and, until recently, only the singular hectare of vines, he has produced only a few barrels each of his 4 cuvées: Là-Haut, Là-Bas, Les Perrières Savagnin, and Les Perrières Pinot Noir. His first millésime, 2015, debuted in 2017. 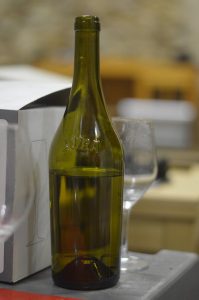 We first stopped by the new cellar to taste the millésimes in the making, where Nicolas is playing around with new blends including a single barrel of Chardonnay/Savagnin/Pinot Noir co-fermenting together. He also gave us a little history, and a taste, of traditional grapes mixed with vignes sauvages. While there seem to be many sides to the story of why winemakers stopped using these hybrid vines (reasoning varies from chemical company lobbying after the war to absinthe-like hallucinations), they definitely add something new and intriguing to the mix. 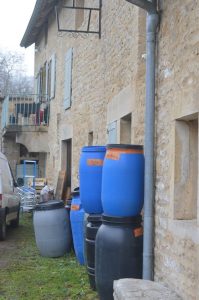 We then visited his new vines in Côtes du Jura, where he’s just starting to get to know the parcels and their fruit. Once he has a first harvest, he’ll start experimenting with blends of different parcels and maybe some singe-parcel cuvées, à la Ganevat. He was eager to show us around and share his ideas before tending to his vines for the rest of the afternoon.

Nicolas’ winemaking is certainly a testament to his passion and hard work. In just few years, he’s created a buzz in the ever-growing Jura-loving community. We’ll all be impatiently awaiting his new vintages over the next few years, and hope that there will be more to share as his story continues. 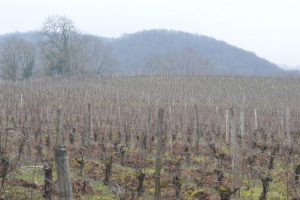