Bertin-Delatte was actually the very first producer that I worked with when Paris Wine Company started in 2012, and over time as they better understand their vineyard and craft, they have evolved from a very good producer to an exceptional one. The heart of the domaine is the Echalier vineyard – 3 hectares just outside Rablay-sur-Layon which they took over in 2008. The vineyard had been organic, but poorly tended, and much of the initial work involved replanting missing vines, pruning, and generally bringing the vineyard into a condition to make great wine. 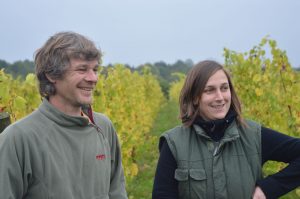 For the first few years, they produced the wines in a neighbor’s cellar, and eventually were able to build their own house and winery at the edge of L’Echalier overlooking the vines. Having worked with Mark Angeli and inspired by their neighbor Richard Leroy, it was evident from the start that they would farm organically and make natural wines with native yeast and minimal use of SO2, with the goal each year of producing an exceptional dry Chenin Blanc.  Each vintage, half of the harvest from L’Echalier vineyard is fermented in new and used barrels, and the other half in stainless steel tanks. After a year, the wines are assembled and left “en masse” for another six months before bottling.

The result is a unique Chenin Blanc that is true to their vision and their terroir. Rather than look to expand and produce more wine, Bertin-Delatte’s goal is focus on what they already have and continue to improve L’Echalier each year. It’s well worth tracking down a bottle each year to follow along, as the wines are already exceptional.