In 2010, in his last year of winemaking studies, Etienne Calsac decided to replant a small edge of his family vineyard in the Côte Sezanne. At the time, all of the grapes were sold off to one of the big Champagne houses, but Etienne already envisioned creating his own domaine, and so he chose to plant three rare heritage varieties – Pinot Blanc, Petit Meslier, and Arbanne. Since the early 20th century, Champagne has been known for Chardonnay, Pinot Noir, and Pinot Meunier, and Etienne was curious to work with these lesser-known grapes.

Six year later, Etienne had already created his own successful, growing domaine, and decided to vinify this micro-parcel for the first time. The wine was aged in a single 600 liter barrel for 7 months, and then kept the total production of 800 bottles on the lees for 2 years. He named the wine “Les Revenants”, meaning “those who come back”, and chose a family photo of his mother as a young child proudly walking back from a harvest surrounded by her family. 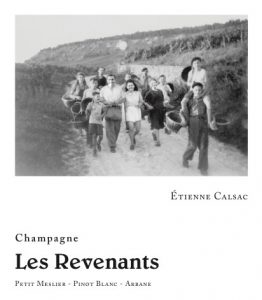