I first met the Burguet brothers nearly ten years ago, when I was still working as the wine director at Spring Restaurant. When I recently reached out to Jean-Luc Burguet to say hi, I was surprised to hear back from him immediately. As when you see an old friend, during a visit a few weeks later, it felt like no time had passed at all. We laughed throughout our tasting more than I can remember, all while tasting some damn good wines. This kind of friendly and open intimacy is rarely shown in Burgundy, and makes it all the more exciting to share the story and the wines. 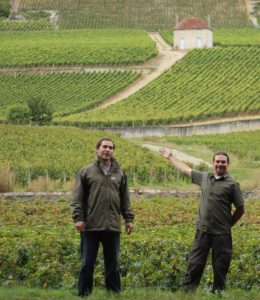 The domaine was founded by their father, Alain Burguet, in the 1970s. From a young age, Alain took care of the vines of retired farmers who owned small parcels of vines in the village, and as they retired, he was able to piece together over 40 small parcels throughout Gevrey. Today, these form the basis for the Domaine Burguet, which has augmented with inherited vines and purchases over the years. 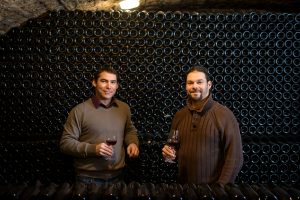 Today, the domaine has just over 10 hectares of vines in Gevrey and produces mostly Gevrey-Chambertin wines across two cuvées (Symphonie and Mes Favorites). The domaine has been practicing organic since the late 1970s, when Alain decided to begin plowing his vines and stop the use of chemicals in his vines. In addition to the Gevrey Village, the estate produces Bourgogne Rouge, two Gevrey 1er Crus (Champaux and a tiny bit of Lavaux Saint-Jacques). They also purchase grapes to round out the range with some Chambolle, Vosne, Vosne 1er Cru, and Grand Cru Chambertin-Clos de Bèze. All of the wines are plush, consistent, and delicious – and well worth seeking out.