The first of this ephemeral cuvées, Cuvée Comète #1, was born when he was harvesting with his longtime friend, Maxime Chenet, a Reims restaurateur who’s deeply passionate about wine. After years of harvesting with Etienne, Maxime’s lobbying for a chance to vinify a barrel finally paid off during the more ample 2018 harvest. For his barrel project, Maxime selected three parcels: one in Grauves, which was cool and acidic in 2018, and two parcels in Avize, which were richer for the sunny vintage. The wine was fermented  in a single barrel with only native yeast, no fining or filtering. As the wine finished, Etienne and Maxime decided this dalliance was “particularly emblematic of the Côte des Blancs,” and merited its own bottling under the “Cuvée Comète label.” 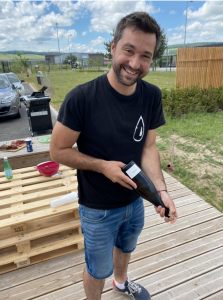 Etienne and a bottle of the future Val L’Hermite.

Building on this successful experiment, Etienne has queued up three more Comète cuvées, to be released in whatever order makes sense: A 100% Petit Meslier cuvée, a single vineyard from the  Côte de Sézanne, and a no added sulfur cuvée. Unfortunately these will be as fleeting as their name suggests, with volumes maxing out at one or two barrels. 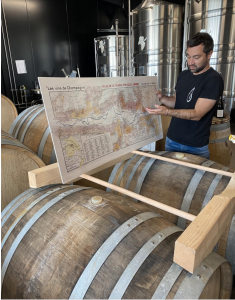 Master of the Côte de Blancs and the Aube.

Joining the main Calsac lineup in 2022, Etienne will be making a 100% Pinot Noir cuvée from a single parcel in the Aube, “Val L’Hermite” (the valley of the hermit). Etienne took over the parcel in 2018 from family members but unfortunately he doesn’t have any deeper historical context about this evocative place name! The parcel is a southwest-facing slope on chalky soil, and this first bottling, from a 2018 base vintage, carries the acidic framework of the chalk soils, with the characteristically fruity 2018 Pinot. Release will be “sometime next year” and Etienne thinks it will be Extra Brut, dosage to be determined. Watch this space for more exciting news from our maverick in Avize.