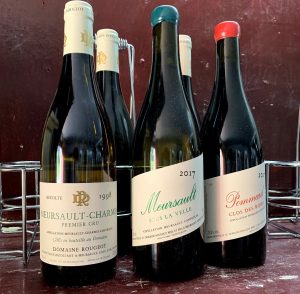 Since returning to Meursault in 2010, Pierre-Henri Rougeot has oriented his family’s domaine in a new direction, transitioning to certified organic farming in the vines and low-intervention winemaking in the cellar. For many producers, the idea of making wines without sulfur dioxide (SO2) is both appealing and nerve-wracking. Sans-soufre wines in barrel can taste pure and ethereal, but SO2 is nearly essential to control fermentations and prevent flaws in the wines.

Pierre-Henri is an idealist, but not a purist, and his vision is to make sans-soufre wines whenever possible. Each barrel begins élevage sans-soufre and Pierre-Henri regularly tastes each barrel throughout the ageing. If he has any doubt, he adds a microdose of SO2. Elevage lasts for 9-18 months in barrel depending on the cuvée, and at the time of bottling, he separates all of the barrels with no added SO2 and bottles them separately under the alternate unusual label shown below.

Some people will ask if a sans-soufre wine  is “better” than the regular bottling. All we can say is that both are delicious, though the sans-soufre bottlings are produced in smaller quantities and worth searching out to taste.