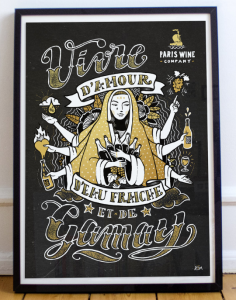 On a cold morning in February, we toured the cellars at Pierre Cotton. Clearly there had a been a party recently, and many of the barrels were covered with distinctive chalk drawings lauding the virtues of Gamay. Clearly these were done by Pierre’s friend Romain Renoux, a local artist who also did Pierre’s labels. 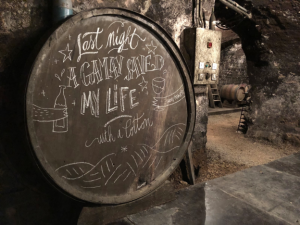 Only a few months worth of phone calls and voicemails later, we were able to connect with Romain, and asked him to design our first poster. The only direction we gave was the French phrase “Vivre de l’eau fraîche, de l’amour, et du gamay”, a twist on one of my favorite sayings, “Vivre d’amour et d’eau fraîche”, which roughly translates to “All you need is love…and cold water.”

Romain’s original sketch felt a bit too heavy on the Catholic iconography for a wine poster. We had a few interesting conversations about the role of iconography, tattoos, and religion as they relate to visual culture and wine, and a week later Romain sent the revised sketch. I replied that I didn’t really have a choice. It was clearly necessary to bring this image of the goddess of Gamay to the world. 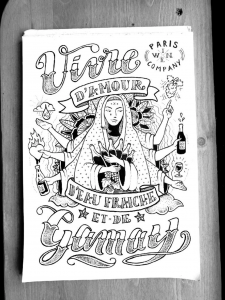