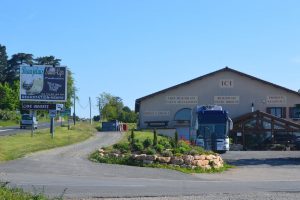 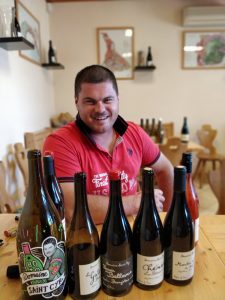 Working with Raphael Saint-Cyr and watching the domaine evolve over the past years has been one of the most exciting and fulfilling experiences I’ve had at Paris Wine Company. In 2008, Raphael took over the family domaine when he was barely 25 years old and immediately converted the entire 20 hectares to organic farming. This allowed him to enter into a loose association of organic winemakers called the Beaujolais, who present their wines together each year. Because he isn’t from a famous “cru” Beaujolais and the wines were mostly sold at the domaine instead of to restaurants or export, Raphael entered into the group as a bit of an outcast. 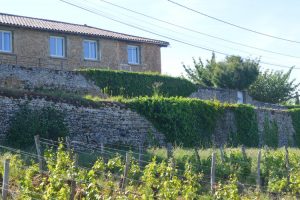 The Saint-Cyr vineyards are located mostly in the Pierres Dorées, the straight-up Beaujolais vines geographically and geologically isolated from the more prestigious cru vineyards like Fleurie, Morgon, or Moulin-à-Vent. Not only are these vineyards further to the south, but they are also rooted into gold-toned limestone instead of decomposed granite further north. Additionally, the size of the domaine meant that Raphael’s day-to-day operations were much different than a smaller domaine, and the big changes Raphael imagined had to be made much more slowly.

After tasting and spending time with the other producers in the Beaujolais, including Jean-Louis Dutraive, Yann Bertrand, and Paul-Henri Thillardon, Raphael has gradually changed his vinification from destemming and long ageing to whole cluster carbonic and shorter élevage in tank and used barrels. This is most evident in the new “black label” cuvées, Terroir de Bellevue and Chénas Les Journets. After we suggested offhand that he should try making a pet nat rosé, Raphael knocked it out of the park in 2017, then again in 2018, and the bubbly Pet Nat Saint Cyr has become a calling card of the domaine.

Throughout the evolution of winemaking over the past few years, it’s been even more exciting to watch Raphael evolve as a winemaker. He’s clearly more confident and wholly part of the group, producing wines that are head-to-head as delicious and inspiring as anything from the top producers of the region. What’s more, Raphael seems to embody the spirit of the Beaujolais in both his wines and his person: generous, joyful, and always ready for a party. 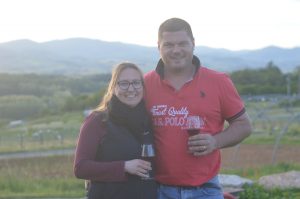