It just so happens that Alain’s son Benjamin is a well-regarded illustrator living in Paris. His signature style depicts whimsical and magical landscapes without using the color black. 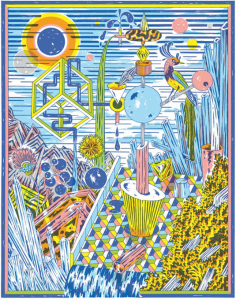 For the Domaine Courtault-Tardieux labels, Benjamin took inspiration from the name of each cuvée: the single-vineyard Sauvignon “Avec Vue Sur le Cher,” which simply means “with a view of the Cher River” and depicts the emblematic river of the region. (Note: the Loire River is bigger, but is further away from this part of the Loire Valley.) There’s also the new blend of Cabernet Franc and Côt, which he named Dialogues, and aptly describes here:

“Listening to the eponymous 1995 album by Charlie Haden (bass) and Carlos Paredes (Portuguese guitar) inspired the name for this new cuvée. A bit about its origin: 2018 was a smooth harvest except for the final day. We had two varieties left to harvest, but only one tank remaining. After many heated discussions, we were able to reach a continuous dialogue, where the dual objective of balance and harmony could be reached over time [through mastering a co-fermented blend of these two varieties.]”