Bitoku is a wine made with grapes grown in Carlos and Laura’s own farm. Therefore, they wanted to give it a name that represents its origin. Bitoku is the name of the Japanese carp that lives in the water basins of a traditional farm (similar to a small pond). It is the emblem of the wine and guardian of our lives. It means “virtues” in Japanese. The name also has a strong relationship to the seven virtues of Bushido (the philosophy of Samurai). For them, the virtues show the way that a winemaker has to follow, from the vineyard to the cellar.

“A Tapadas,” located in municipality of Puga in the DO Ribeiro. Estate vineyard owned by Carlos and Laura, planted with Treixadura, Godello, and Loureira (all white grape varieties).

18 hours of cold maceration. Fermentation with natural yeast in stainless steel tanks. In January and February, batonnage is done for a short period in order to increase contact between the wine and the fine lees.

Harvest typeHand Harvested
Fining/FilteringBottled with Small dose of SO2, no fining with chemical agents, filtering or correction.
Downloads
Packshot Label 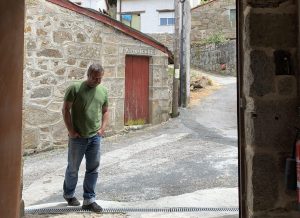 The origin of this unique name comes from Moises, Carlos’s grandfather, who grew up in quiet, rural Galicia in the 1930s. Moises had a reputation as a bit of a town troublemaker, whose jokes annoyed the entire village. One of his famous tricks was to climb up the highest hill with his brother and make a huge noise with a toy in the middle of the night. People began calling this strange sound the “demon’s snore,” and Moises earned the nickname “O Demo da Ronca,’ the snoring demon.

Adega do Demo is owned and run by Laura Rodriguez and Carlos Lorenzo, who have been looking after his family vineyards since 2005. Their aim is to produce quality wine based on the traditional viticulture and winemaking method of Ribeiro area (Ourense, Galicia).