The original label for the domaine has the oval depiction of the vines on light yellow paper, while the newer label has a white background and a drawing of the domaine with Fleurie’s emblematic Chapel de la Madone more prominently displayed at the bottom of the label. 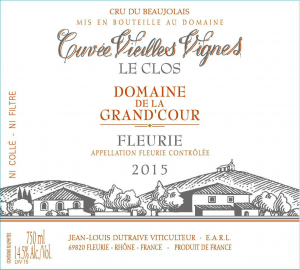 When Jean Dutraive (Jean-Louis’ father) purchased the Domaine de la Grand’Cour in 1970, they produced only one wine with the original label. Jean decided to keep the same label since it was already known by the customers. After Jean-Louis took over, he decided to enter his wine in a local wine contest, and the prize was a new label design. Not wanting to abandon the original label of the domaine, he decided to use this new label for a new old vine cuvée in 1994 –  Fleurie ‘Vieilles Vignes,’ and continued the same model as he added the single-vineyards ‘Chapelle des Bois’ and ‘Champagne’ to his lineup.