Having vinified over 30 vintages of Côte-Rôtie, Jean-Michel Stephan is one of the true masters of natural winemaking in the Northern Rhône. His wines have a vivacious purity that make them instantly identifiable, marked by a balance of energy and transcendence that comes from a lifetime pursuit of his vision to craft flawless wines with absolutely no additives.

Jean-Michel comes from a long lineage of regional farmers. He remembers his grandfather farmed just about anything and everything, and was successful enough to sell nine full train wagon loads of apricots per year. At the end of his vegetable rows, he planted grapes on trellises to divide his fields from the neighbors, then sold this wine off in barrel to local bistros. At the time, the steep hillside vineyards of the area were considered so unimportant that they were given away for free alongside a purchase of flat fertile farmland next to the Rhône river, which is how the family acquired the plot known today as Les Binards!

As a teenager, Jean-Michel left home to work in the vineyards for a certain M. Brun in the Beaujolais, where he discovered a passion for vineyards and winemaking, as well as a friendship with the young Jean-Paul Brun. In 1986, Jean-Michel decided to plant his own vineyards and produced his first harvest in 1991. For the first few years, he sold the grapes off to Guigal, then eventually produced his first wine in 1994. The following year, he began certified organic farming, though the vineyards had been farmed as such since the beginning. Jean Michel’s wines have always been produced from organically-farmed fruit and vinified with nothing added – both of which were unheard of in the region at the time. Even though the family farm was strictly conventional, Jean-Michel was always interested in organic farming for reasons that he can’t explain.

Soon after, he was invited by his Belgian importer to pour wines at a salon held at the famous Cantillon Brewery, where he met other natural wine pioneers like Marcel Lapierre and Philippe & Michèle Aubèry of Domaine Gramenon for the first time. He learned that there were other people searching for a way to produce natural wine without any additives, and was inspired to continue his work to craft these wines in Côte-Rôtie, while integrating into a movement of like-minded producers. It took him many years (and several wrong turns) to perfect his risky sans sulfites (no added SO2) style, but a taste of any of his bottles promises to convert any lover of Syrah or Northern Rhône wines.

The domaine farms five hectares of Côte-Rôtie spread between three different parcels: Côteaux de Bassenon, Côteaux de Tupin, and a tiny plot in Côte Brune. Each parcel is vinified separately using carbonic or semi-carbonic maceration depending on the vintage, without the addition of any yeast, enzymes, or SO2. Les Binards comes from the lower part of Tupin and is aged for 12 months in stainless steel tanks. The other three cuvées are all aged in barrel for 12-24 months.

In 2017, his son Romain joined the domaine, and together, they planted an additional five hectares outside the Côte-Rôtie appellation in the nearby towns of Roussillon, Verin, Condrieu, Ampuis, and Chasse-sur-Rhône. 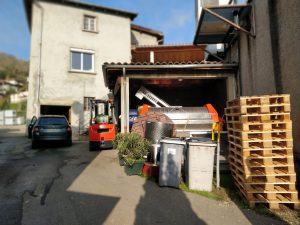 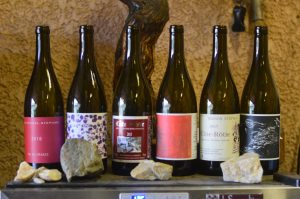 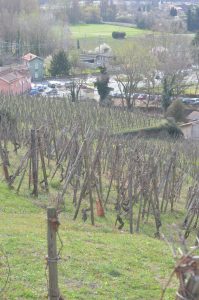 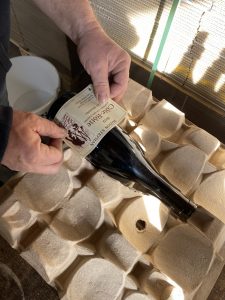 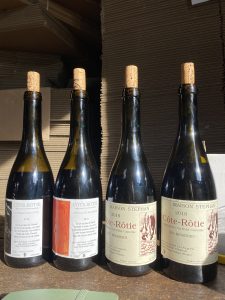 Côteaux de Bassenon is the most southerly vineyard in Côte-Rôtie, and is sometimes labeled Côteaux de Semons. The majority of Jean-Michel's vines in this parcel were planted in 1896, which would make them the first vines planted after the phylloxer...

With the arrival of the next generation, Jean Michel decided to plant an additional 5 hectares of vines outside of the Côte-Rotie appellation together with his son Romain. They chose to plant a mix of the traditional grapes: Syrah, Roussanne, Marsa...

With the arrival of the next generation, Jean Michel decided to plant an additional 5 hectares of vines outside of the Côte-Rotie appellation together with his son Romain. They chose to plant a mix of the traditional grapes: Syrah, Roussanne, Marsa...

The Côteaux de Tupin comes exclusively from 100% Serine vines, an older variety of Syrah found only around Côte-Rôtie that has lower yields but incredible quality. Part of the vineyard was planted in 1941, which is blended together with the Serine ...

Les Binardes comes from the vines Jean-Michel planted between 1994 and 1997 in the lower part of the Coteaux de Tupin and is an explosive and emblematic Côte-Rôtie. As is traditional in the area, a bit of Viognier is co-fermented with the Syrah, fo...

The cuvée So'Brune comes from a miniscule parcel in the iconic Côte Brune vineyard Jean-Michel planted in 1994. It has the traditional blend of 80% Syrah and 20% Viognier, and is an elusive and rarely seen wine from the domaine.